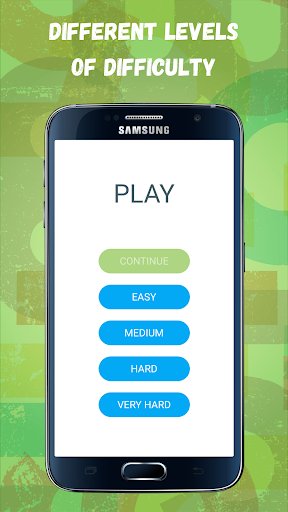 Short description of Sudoku: Train your brain APK Game – Despite the abundance of different exciting games of all kinds, the good old sudoku will never lose its fans and will always be in special demand. If you like puzzles or complex educational games, then this application will excellently fit in your smartphone and will not allow your brain to go sour from laziness and boredom.

The Japanese game Sudoku is not only about the colorful name and comfortable interface, faithful to the panel of the famous game. This application has a great number of advantages, which distinguish it from the ordinary game of Sudoku:

– The availability of the menu of game statistics, with which you can keep track of all your achievements at various levels of difficulty;

– The game has 4 levels of difficulty (Easy, Normal, Hard, Very hard) to help you get started in the first rules of the game, if you are new in this business, and after make your brain a real workout and develop your logical thinking;

– User-friendly interface allows two separate keyboards at the same time to enter values ​​in the cell and put your notes, which will help solve the challenging puzzles of the game;

– The system prompts and error checking to help you get out of the highly complicated situation, which prepares you to this Japanese game, and give you the correct value in the selected cell, but be careful, the number of the game is limited;

– Support for offline mode allows you to play Sudoku online, if you have an active connection to the Internet, and without it;

– The level of complexity “Very hard” contains a total of 17 cells in the puzzle;

– For those who like complex «sudoku puzzle» then sold more than 50 thousand different tasks.

This game is implemented fairly user-friendly interface, colors are pleasing to the eye perception. However, the simplicity of this app is only in its interface, then start the real and most difficult task of the game, so that is a good brain training is provided to you.

In addition to the user-friendly interface and well-implemented ideas, application of Sudoku: Train your brain is tangible improvements, such as the availability of the statistics function and the presence of two separate keyboards, which greatly simplify the gameplay is so complicated puzzle.

Game Sudoku: Train your brain – this is a simple interface, intuitive gameplay and nothing more.
brain training is always needed, but not all games are developing logic and memory may be of interest to the user for a long time. All the fault of not properly organized interface, or really boring idea of ​​the game. But in the case of games Sudoku: Train your brain different, in addition to properly implement the gameplay, the brought improvements and other improvements, this application really will like. In Sudoku you can play at any convenient time for you.

Download logic games of different genres, you can anywhere, but Sudoku is really exciting, proven and entertaining game for your smartphone.
Love the difficult games, or else you are a real fan of Japanese sudoku, then this app is just what you need.
Improved application speed