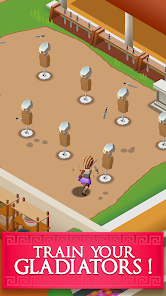 Short description of Idle Gladiator Empire Tycoon APK MOD Game- Are you ready to keep the Emperor happy and build up and create a stunning Roman Empire as the tycoon of all tycoons?!
The focal point of Rome was the Coliseum and your aim is to build up your Roman Empire in order to train the mighty fighty Gladiators as a Roman Empire Tycoon. Earn big money to keep growing your empire.
In order to train your gladiators, you’re going to need to build their training facilities in the city. Without those training areas, they’ll just idle around and won’t be fit to fight in your empire.
On top of that, you’ll need to create other key Roman buildings and facilities so that the people can eat, drink, pray and enjoy life before they head to the tycoon’s Coliseum and enjoy watching the brave gladiators fight for the people and the emperor.
Here is what you can build up in Idle Gladiator Empire Tycoon.
SWORD TRAINING – It’s a timeless weapon and the sword is a key part of gladiator training to impress the Roman emperor and the people watching. These gladiators cannot be idle, they need to get training!
SPEAR TRAINING – It’s a simple weapon, but if used correctly, it can be lethal from a distance. Use it wisely and your gladiators can win!
GYMNASIUM – you’re going to need to get your gladiators fit in your empire and there’s no time to idle. So build up your gym so they can pump iron and become super-strong fighting machines.
EATERY – food is the fuel that your gladiators will need to have the energy to last in the big fights in the Coliseum.
LODGE – your gladiators need to be well rested to have the energy and power to fight the fight. So build up your lodge in your empire. No idlers here.
TRIDENT TRAINING – one of the classic Gladiator weapons is the three-pronged trident. Lethal if used correctly, but it takes time to master.
SHIELD TRAINING – attack is one thing, but defence is as important in a big Gladiator fight in front of the baying masses. So make sure your gladiators are well prepared to defend their lives with shields.
BALANCE TRAINING – Without balance, your gladiators are going to struggle to win a fight. So improve their balance to see if you can knock them off.
TEMPLE – any Roman Empire tycoon needs to know how important the Temple is to its people. So build it up to a place where people can meet and pray.
TAVERN – the Romans loved to meet up and a tavern is a central part of any Roman tycoon’s empire. Eat, drink and be merry!
FOOD STALLS – food is so important to the life of Romans and you’ll need to create food stalls to keep the empire well fed and happy.
BATH HOUSE – Roman baths were an incredible invention and a key part of Roman Empire society. So build up your baths and enjoy a long soak!
So get ready for Idle Gladiator Empire Tycoon and build up your empire to train the very best gladiators.
Idle Gladiator Empire Tycoon Apk MOD