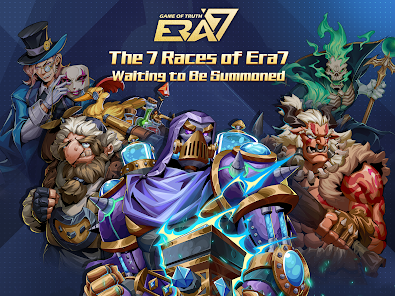 Short description of Era7:Game of Truth APK MOD Game- An introduction to Era7
★★Era7: Game of Truth is a metaverse-style TCG, developed on the Binance Smart Chain (BSC), which has been created by a team of core blockchain technicians and members of well-known casual game development companies.
★★This is an addictive yet state-of-the-art card-trading game that uses a groundbreaking new gaming method. With the perfect combination of fighting and strategy, this game becomes thrillingly immersive and is split up into separate three-minute games.
★★Players can combine the cards in their own card library in different ways to ensure that their deck is as strong as possible. They can play either PVE or PVP by deploying and placing cards. Different cards have different effects, and whether we’re talking about Common or Legendary cards, players will be keen to collect them all. Players will be tasked not only to watch their own deck but also to carefully observe the movements and positioning of their opponents. This provides the player with an incentive to practice and develop their in-game skills over time while receiving fantastic brain training akin to that received by chess players. Only, this training is manifested in skillfully using heroes to ride thousands out to the battlefield.

CARDS
★★Era7 allows players to experience the value in GameFi, with a very low threshold for entry. Era7’s cards are divided into Master cards and Battle cards. Various cards of various races increase the richness and playability of the game tenfold. There are seven forces and up to 1,000 cards to choose from; truly endless variety for the player.
★★Era7 cards are also NFTs. They have a high collector’s value and appreciate with time, not to mention that they can be used to fight and summon new cards!

FIGHTING
★★The Game of Truth is played on a battlefield made up of 9 * 9 squares on both sides. First of all, both sides will randomly draw cards from their pre-built 30-card library. The player will then be able to drag out cards to use in-game. Battle cards will then attack and defend with the passing of each round, while some cards will have characteristic effects that transcend rounds. The battlefield is divided into three fronts. If there are no cards on the opponent’s first front, attributing damage will be caused to the cards on the player’s second front, and so on. When the opponent’s HP drops to 0, victory is attained. Conversely, if your HP drops to 0, you’ve lost the battle.
★★The core essentials of combat are: to establish battlefield advantages and powerful card groups; to play games with opponents through thought-out strategy making.

Synthesizing
★★Through using the Synthesizing System, players can consume ERA and GOT tokens to combine the exact same two NFT Battle Cards (the same rarity degree, same character, and same Lv.), to create a level-up NFT, Battle Card.
★★Synthesized NFT Battle Cards will randomly gain higher attack power, defence power, and/or other values, including increasing the mining power (Hashate).Higher levels of NFT Battle Cards not only perform better in fighting and mining, but also have higher market value, which means they can be traded at a high price in the Marketplace, and overall increase profits to players.